WHAT DOES IT DO?

LOGIN / RETURN TO THE APP

SIGN UP NOW TO ENJOY the POWER OF TEACHERMADE PRO.

March 22, 2021
In this Power User Profile, I'm taking a look at the remarkable Rancho Verde Elementary School and how they've been delivering excellence to their students during a challenging year of hybrid teaching and learning. 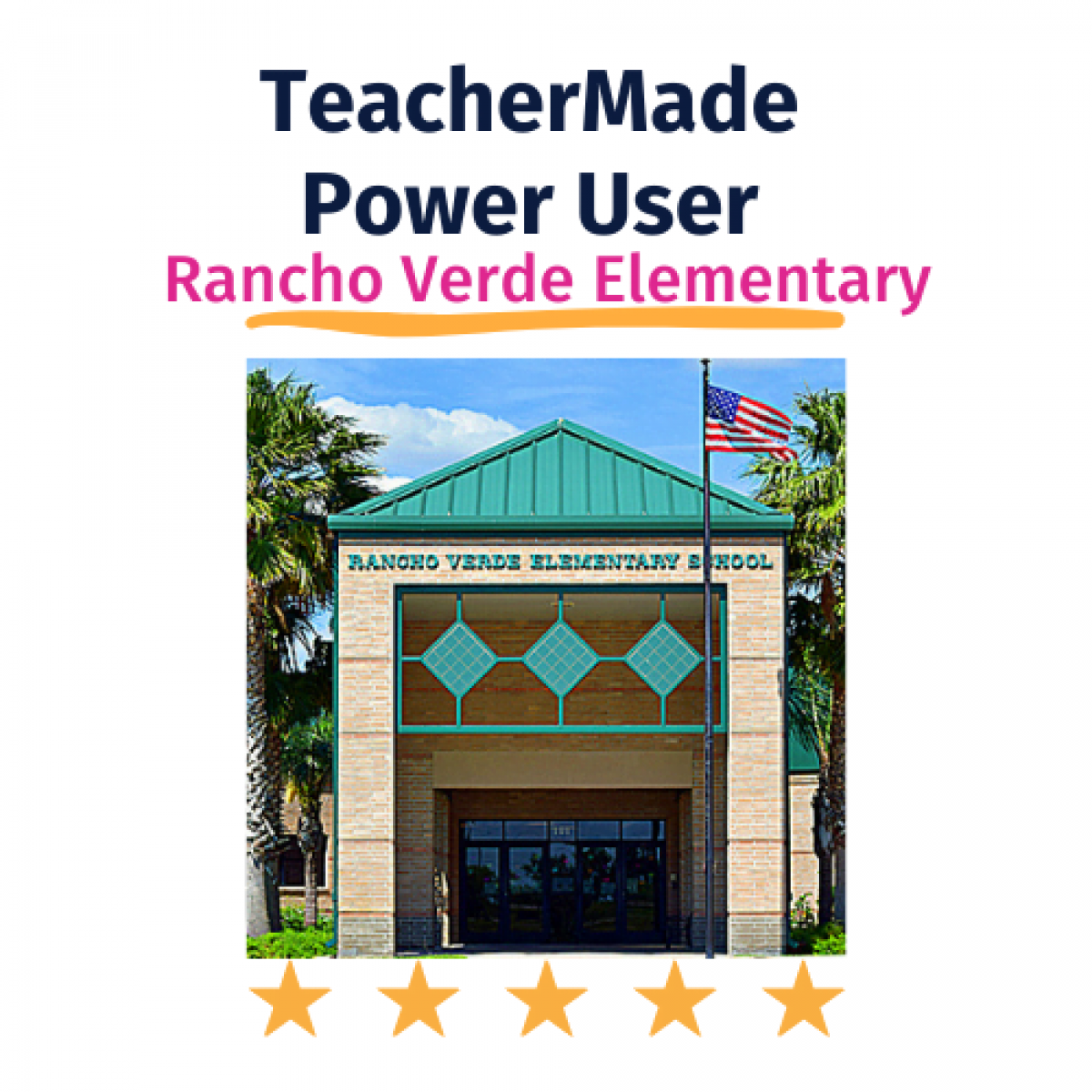 Hybrid learning is when students in the classroom and students at home are taught the same lessons by the same Teacher and at the same time. Those students who cannot be physically present (e.g. at home) use videoconferencing tools like Google Meet or Zoom to see the Teacher and synchronously learn with the other kids at their school. The classroom Teacher teaches all students using the same materials whether they’re at home or sitting at their desks at school. Because of this, hybrid classrooms make extensive use of online tools like Nearpod, Seesaw, or TeacherMade so physically present and virtual students can work on the same activities simultaneously.

Hybrid classrooms may be a classroom model that lingers long after the pandemic is contained. Did COVID open a Pandora’s Box of troubles for Teachers? Find out how Rancho Verde Elementary School is using TeacherMade to manage the work in their hybrid classrooms.

TeacherMaders at Rancho Verde Elementary use the TeacherMade platform 4-5 times per day, putting them into the 1% of TeacherMade users worldwide. This honestly isn’t as surprising as it seems; exceptionalism is their goal – and they usually achieve it!

Just after TeacherMade went live back in October, Rancho Verde Teachers began using the app to make activities for their students. They did this in response to hybrid and remote teaching challenges that emerged during COVID, but since then, they haven’t stopped!

On average, these teachers have made over 200 digital worksheets per Teacher (as of this writing) and have received back thousands of submissions from their students – both at home and in the classroom.

The determination of Teachers and their uncompromising expectations for their students is best typified by the staff at Rancho Verde Elementary School in Los Fresnos CISD, located on the northern edge of Brownsville. Out here, you wouldn’t even know you were in a “city” except for the water treatment plant that must be for some population center somewhere.

Rancho Verde was erected on the Palo Verde plains, the same location that marked the beginning of the U.S.-Mexican War. A famous battle occurred a mere two miles west which led to the founding of the city of Brownsville. The school rises from the vast fields of cordgrass as a reminder that anything is possible… and the possibilities are endless.

Built in 2008, Rancho Verde Elementary has already been named a National Blue Ribbon School by the U.S. Department of Education. It hosts a nationally acclaimed STEM program called Project Lead the Way and has been recognized as a Project Launch Distinguished School for multiple years.

And consider this: they now have a cutting edge full-day preschool program that launched during COVID.

You may be wondering how these Teachers and students have continued to thrive, even during the most challenging conditions they’ve ever faced.

Rancho Verde Elementary is a model for how TeacherMade can be used to engage students inside and outside the classroom like never before.

Improving Equity in the Hybrid Classroom

Whenever it’s time to practice new math, reading, or science skills, Rancho Verde students open up their TeacherMade assignments and get to work. Like so many TeacherMaders, the faculty has digitized the workbook pages their students once wrote on in the classroom. It’s hard to use physical pages when some of your students are zooming into class.

Many of you remember the early days of the pandemic when you distributed PDFs, the students, who could, printed them out, worked on them, took pictures, and emailed back photos of their work. (Ugh!!) Now, no matter the location, their students use the TeacherMade digital tools to complete their assignments.

Of course, a big bonus for the Teachers is that there’s no more lugging around piles of papers to grade. Because they use the autograding features in TeacherMade, much of the grading is done instantaneously.

It takes a few seconds longer to set up the activity, but the savings in time and aggravation are worth it. Teachers give their feedback digitally and the time lapse from instruction to feedback and retakes is condensed into minutes instead of hours or days.

Rancho Verde has implemented the use of TeacherMade across entire grade levels. Instead of working in isolated classrooms, their implementation has been comprehensive. This approach makes a huge difference in the successful adoption of any ed tech.

In the same way we as Teachers provide scaffolding for our students, when we work together on a technology platform we can provide the support to each other that we need to be effective practitioners.

At Rancho Verde, Teachers are working in grade-level teams and sharing their knowledge of the TeacherMade platform across the institution. They now have the organizational knowledge necessary for smoother, more efficient deployment.

Their Power User status in TeacherMade is the evidence of this best practice in action.

Though I’m ambivalent about end-of-year testing for the 2020-2021 school year, I’ll be looking forward to seeing STAAR test results for one big reason: I predict Rancho Verde Elementary students will be at or above grade level.

I’d like to think that it’s because their decision to use TeacherMade has reduced the challenges of a hybrid classroom and virtual confusion. But… maybe… and more so… it’s because the Teachers and administrators at Rancho Verde are so determined to deliver a quality education to every student in their school– that not even a pandemic is going to slow them down.

We thank the Teachers and administrators for providing such a powerful example for other TeacherMaders to follow.

SIGN UP NOW TO ENJOY the POWER OF TEACHERMADE PRO.